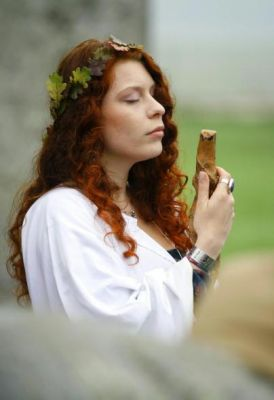 Who Were the Druids?

The Druids were ancient religious leaders of the Celtic people. The Celts were spread throughout Gaul, Britain, Ireland and other parts of Europe, Asia Minor and even the Balkans around the 5th century BC.

They were highly respected in society. They were advisors to the kings. They were intellectual as well as poets, astronomers, magicians and astrologers. It took them 19 years to gain the necessary knowledge and skills in alchemy, medicine, law, the sciences and more. They were healers and were involved in developing strategies for war.

The Druids officiated over public and private sacrifices. Tribal assemblies were held on days vital in the agricultural year, the solstices as well as Beltane, May 1, and Samhain, November 1.

They settled disputes and issued punishment. Those who did not obey the decisions of the Druids were banished from the tribe.

For centuries, there was a common misconception that Druids were only male, however, there are numerous references of women being Druids, as well.

Caesar was well aware of the female Druids, but most of the Roman writers ignored women in general, so references were far and few between.

Strabo wrote about a group of religious women who lived on an island near the Loir River, in the ocean but not far from the coast. No men were permitted on the island which was  inhabited by Samnite women.

Tacitus mentioned female Druids when he described the slaughter of the Druids by Romans on the Island of Mona in Wales. The women wore black and were known as Banduri (female Druids).  They dashed between the ranks of armed warriors with their hair dishevelled and waving brands.

Tacitus also noted that there was no distinction between male and female rulers, and that female Celts were very powerful.

According to the Pomponius Mela, nine virgin priestesses called the Gallizenae lived on the island of Sena in Brittany. They could stir up the sea, turn into animals, cure the uncurable and see the future.

Queen Boudicca of the British Celtic Iceni tribe was the descendant of a Druid and possibly a druid in her own right. She led an uprising agains the Romans in the 1st century AD.

There are many legends concerning a woman named Brighid. It is difficult to say

whether she was a real woman or a Celtic goddess, patroness of poetry, learning, healing and craftmanship. Later the Christian church made her St. Brighid. Coincidentally, her feast day is February 1, which coincides to Imbolc, the pagan festival for the celebration of spring, though there is doubt whether the two Brighids are actually one and the same. There is some speculation however, that Irish Brighid was once the abbotess of a pagan sanctuary which later became Brighid’s monastery near Kildare.

Finn was a mythical character who was raised by a Druidess or ‘wise woman’. she taught him war craft, hunting and fishing, acted as guard and advisor.

Fedelma, a Druidess who was part Queen Medb of Connacht’s court predicted the outcome of the battle with the Ulstermen. “I see crimson, I see it red.” Her prophecy came true. Medb lost the battle and Cú Chulainn perished.

The Historia Augusta was written in 400 AD and mentions a Druidess foretelling the defeat of Alexander Severus. “Go forth but hope not for victory, nor put your trust in your warriors.”

The Roman Catholic church believed that female Druids were sorcerers and witches in cooperation with the devil. They also saw the knowledge of the Celts as a huge danger for their domination.

In the modern practice of Druidry, there are a good number of women involved, the druid community having good representation of both men and women.

4 Replies to “Mythical Mondays: Were There Female Druids?”

Welcome to to Inspiration Pie!
I’m Jo-Ann. Writer, visual artist, wife, mom of two boys, a dog and a cat.